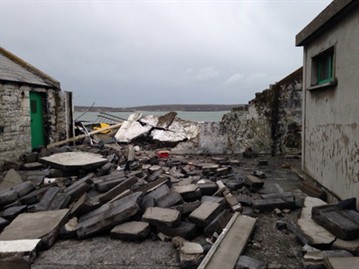 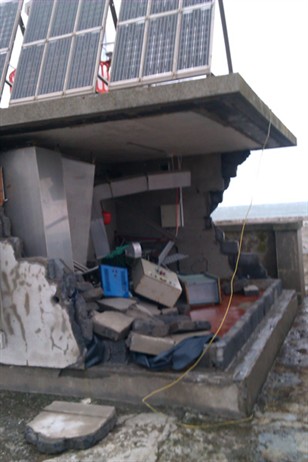 In early January 2014 Straw Island narrowly escaped the first of many severe storms that battered our coast. The storm of the 31st of January was a different matter.

High tide in Galway was at 05:51am on Sat 1st February. This tide, combined with the strong westerly gales resulted in high seas crashing over the lighthouseâs outer storm walls. At 06:30am the screen at Irish Lightâs 24 hour Lighthouse Monitoring Centre in Harwich, England highlighted equipment failures and raised the alarm. 10 minutes later, all communications were down and the modem was dead.

Irish Lightâs first response was to issue a Radio Navigation Warning to shipping in the area, alerting all sea-farers of a problem with the light. Irish Lights then contacted Ronan Gill, Straw Islandâs lighthouse attendant and put him on alert. Ronan reported the light had failed completely having checked from a vantage point near his home on Inishmore.

Due to the severe weather, travelling by boat was out of the question. The only viable option was by helicopter and on Tuesday 4th February, an Irish Lights team was dispatched to assess the damage including mechanical, electrical and electronic experts complete with tools and spares.

Nothing could have prepared them for what they found when they landed on the beach beside the lighthouse.Â  Two sides of the engine room had been washed away. The generator, fuel tanks, battery chargers and various control cabinets had been washed away or were strewn around the compound. The large bank of solar batteries lay on their side. Â Waves had crashed through a wall and two doors into the mess room, upending the fridge and furniture within.

Thankfully the reinforced concrete roof remained in-tact, sparing the solar panels. The roof appeared to defy gravity as it remained in place and was held up by half a buckled wall which could collapse at any moment.

The Irish Lights team immediately got to work and by Wednesday 5th February an emergency light was back in operation.

By Thursday 6th, the main light was operational and the solar panels were charging the undamaged batteries. Work was well under way to securing the building against any further storms.

By Friday 7th February remote monitoring was fully restored thanks to the team washing the circuit boards and modem with fresh water and then drying them overnight. Temporary steel bracing was welded into position to support the walls as the Irish Lights team worked tirelessly to restore Straw Island.

Ultimately a permanent solution will be found for Straw Island but with limited manpower and resources at hand this may take some time. Â

The efforts of the dedicated Irish Lights team ensured the important Aid to Navigation at Straw Island has been fully restored for the safety of all - âIn Salutem Omniumâ. (Irish Lights motto)