e-Navigation â the future for ship safety and security

A concept developed under the auspices of the UNâs International Maritime Organization (IMO), e-Navigation is about increasing safety and security in commercial shipping through use of technology and better communication and data exchange between ship and shore.

e-Navigation will provide the mariner with:

The focus of e-Navigation is on presenting the correct mix of information to the mariner andÂ reducing their burden of work, thus allowing a focus on safe navigation.

Three fundamental building blocks must be in place to make e-Navigation fully viable:

It is estimated that the different elements of e-Navigation will be integrated by 2018 and introduced selectively across various geographical areas from then onwards.

While e-Navigation is likely to include systems that interact with physical AtoN, the primary means of navigation will be Global Navigation Satellite System (GNSS) supported by complementary radio navigation systems.

Contemporary technologies already deliver much of what the International Maritime Organization (IMO) e-Navigation strategy envisages. Â However, if technological advancement remains uncoordinated, development of the global shipping industry risks being hampered by lack of standardisation on board and on land, incompatibility between vessels, and increased and unnecessary complexity and costs for all concerned.

This is navigation using radio waves to determine position or line of position. Speed and direction may also be derived from positional information. 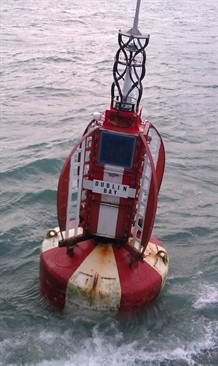 Racons in their basic form receive signals from ships' radars that trigger the racon to emit a characteristic signal that is received by the ship's radar. This signal is in the form of a series of response pulses which will show up on a ship's radar as a Morse-coded trace and allow easy identification of the racon being interrogated â e.g. Kish Bank Morse code T ( - ).

Racons can be placed on any navigational mark (lighthouses, beacons, perches, buoys, etc). The return on the ship's radar will clearly identify the mark from surrounding targets and allow the mariner to accurately measure range and bearing.

We provide 23 racons around the coast of Ireland â Â 14 at lighthouses and nine on buoys.

We have strategically placed racons in order to:

There is also a racon on board the ILV Granuaile to temporarily mark new and uncharted hazards.

A racon can be seen in the topmark of the buoy

AIS uses two channels in the Marine VHF radio band to exchange messages from ship to ship, and ship to shore. Ships equipped with AIS continuously transmit information on their position, course, speed, heading, etc. This allows other ships and shore authorities to receive and assess this information. Large vessels are required to have an AIS transponder on board.

The benefits of AIS are that mariners know what vessels/platforms are in close proximity, their size and type, and speed and direction. This aids large ships to avoid collision even when they cannot see each other. 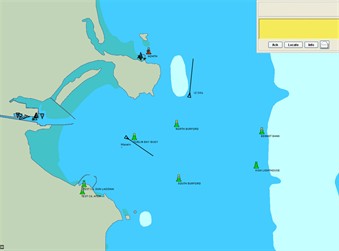 We have 80 AIS transmitters on stations around Ireland and a service level agreement with the IRCG (Irish Coast Guard). Our two infrastructures are used to provide excellent AIS coverage around the coast of Ireland.Â

We can provide AIS AtoN in three ways:

The advantage of a virtual AIS AtoN is that it can be established in minutes, is unaffected by the elements, and needs no power, access or maintenance. Â In addition, it offers the option of marking locations where it is not physically possible or feasible to put a real aid to navigation.

DGNSS provides corrections to the basic GNSS service. Â In addition to improving the accuracy of GNSS to < 0.5m within 50 nautical miles of the coast, DGNSS provides integrity to the GNSS system.

While GNSS system communications can be blocked or faked, DGNSS corrections allow a DGNSS-enabled receiver to recognise and drop faked GNSS corrections. This prevents a vessel from receiving erroneous navigational information.

We operate and maintain a network of three DGNSS transmitters from Mizen Head, Loop Head and Tory Island, with a range of 100 to 150 nautical miles. Â In addition, we operates a number of far field monitoring sites to verify the validity of the DGNSS corrections being transmitted.

E-Loran is an enhanced terrestrial-based navigational system. Using low-frequency radio, it enables vessels to determine their speed and position by receiving signals transmitted from land-based stations.

The General Lighthouse Authorities (GLAs) support the e-Loran programme and are participating in a pan-European Loran network on a trial basis. As a complement to GNSS, e-Loran:

GNSS has revolutionised marine navigation and will remain the primary means of navigation for most mariners into the future. Â It is reliable, accurate and user-friendly. Â However, the low-power, high-frequency GNSS signals are fragile and vulnerable to intentional and unintentional interference.

The main navigational satellite systems are:

It is important not to rely on a single source of navigation when other options are available. Â It is best to retain a mix of complementary systems. Â At present the backup to GNSS are the traditional aids to navigation (lights and buoys), complemented by racons, DGPS and AIS.

Much depends on the pace and geographical and sectoral extent of e-Navigation rollout. On a regional basis, it is likely that the GLA area of interest will be among the first to provide an e-Navigation environment. Â The timescale for sectoral penetration of mandatory e-Navigation to include leisure and fishing users is less clear.

User training, both ashore and onboard ships wiil be of critical importance in successful implementation of the International Maritime Organization (IMO) e-Navigation strategy.